Does Iran Market have the potential for International Companies and Investors?

Let’s first have a look to some statistics about Iran Population, Internet Users, Smartphone Users, Penetration Rate and comparison between them with other Countries in USA, Europe & the Middle East.

In 2014, the total transactions of Iran online shopping was 17 Billion USD and this amount is only for online payment and other payment methods such as cash payment which is very usual are not included.

Total number of Internet & E-Commerce Business (websites) which have received electronic trust logo are about 13,000 and the rest are working without E-Trust Logo. It means that total number of online businesses in Iran would be much more than this amount and it is growing very fast as startup community and internet users are increasing.70% of Internet users in Iran are between 10 to 29 years old and 42% are female and the rest (58%) are male. 3/5 of Internet Users in Iran use Facebook and 2/5 use Google+.

Critical internet infrastructure has not fully developed in Iran in comparison to other developed countries like France & Germany.

Iran is in the 13th place of top 20 countries with highest number of internet users and has more than 1.7% of world users. This place is upper than Turkey, Italy, Spain and Argentina.

Number of Internet users in millions in Middle-East and North Africa, 2012: 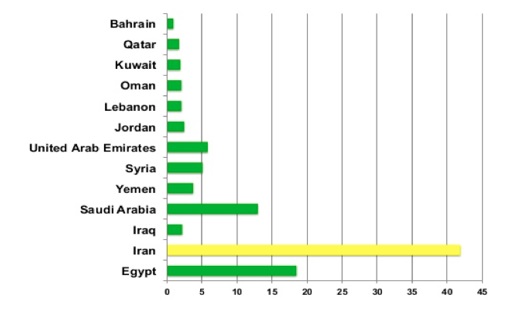 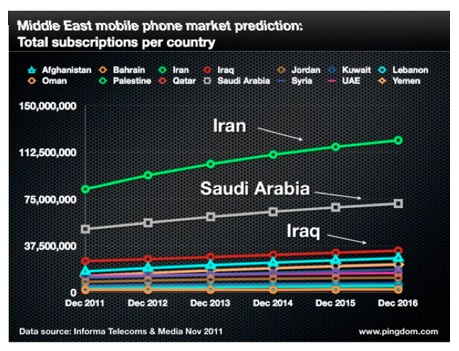 Estimated, 40 million of Iranian people has smart phone. It means that a large number of Iranians has the minimum knowledge of using smartphone and internet.

It is predictable that an E-Commerce boom is going to be happened because the high amount of demand in Iran. Iranians spent $77 billion on food, $22 billion on clothes and $18.5 billion on outbound tourism in 2012.

Many players include Venture Capitals, Angle Investors, Startup Accelerators, Startup Communities alongside Startup Events such as Startup Grind, Startup Spark, and Startup Weekend had a brilliant effect on developing the potential of Iran Market for newcomers.

Nowadays, the knowledge of Online Business has dramatically increased than before. Online Retail Business like ZoodFood and other businesses that service to hotels and restaurants are emerging very rapidly.

Pioneer Internet & E-Commerce Business with the brands of DigiKala, ZoodFood, Ponisha, Webyad & many other great ones are working in Iran so the road is paved for newcomers. For example Digikala was launched in 2007 and now it is thought to be worth around $100 million. Digikala says their business has grown at an average annual rate of 200%. Although International Sanctions blocked most foreign investment and caused many other limitations for Iranian Businesses.

After sanctions & new situation, all shows that Iran has a very high potential for investment and still is the world’s biggest untapped market.

Some companies from all over the world has already established their business in Iran from two years ago. Many other European & Non-European Companies are doing market research to enter Iran Market but speed is an important issue because the ones who come sooner & with plans has the most power of choice.